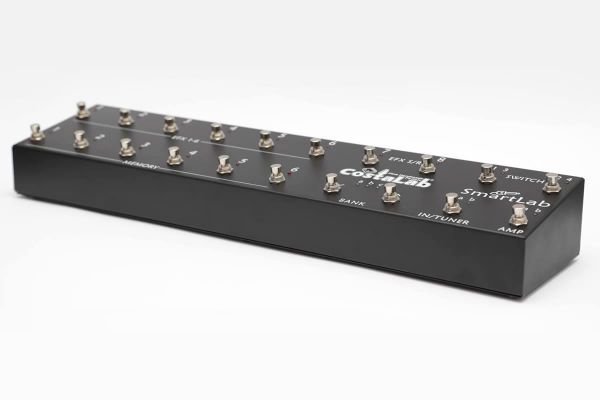 Sold and shipped by: CostaLab

The easiest and fastest way to control pedals, amps and midi complex systems

SmartLab is a routing controller for your guitar and bass guitar that allows a direct and immediate use without any function loss.

The easy, sturdy and straightforward appearance, has all the features that a professional needs.

Each foot is assigned a single function, thus avoiding any possibility of error during use.

The sloping control panel, gives you instant access to each footswitch minimizing the possibility of accidental pressing than others. LEDs of different color indicate the guitarist in a clear and unambiguous operating status of the machine.

Indeed, with a simple look, you can get a complete picture of the active loop, the inputs/outputs enabled, the active switch service and tour/preset.
All this enables the player to use without any special attention.

At any time and without any additional action, the player can decide to change the scene in use:
turn off an active loop, turn off others, change the output, activate a service one.
You just need to press the corresponding switch and the machine will apply the change.
If, after changing a given preset, you want to restore it as it was originally, the "Memory Recall" restores its initial configuration, simply by pressing the number of the current preset.

SmartLab operates with a DC power supply between 9 and 12 Volt.
The presence of a system of regulation and internal filtering, allows the use of DC power supplies also not regulated.
If accidentally SmartLab the power is interrupted, the system "Total True Bypass" also will let the sound of your instrument on (obviously excluding the effects in the loop and letting enabled input A and the output amplifier A).
The system of internal routing is assigned to a high-quality relais specific to complex signals, equipped with gold plated contacts.
This gives the SmartLab a high level of signal transparency.

The 8 available loops are divided in two groups:
The first six are series connected to the first output amplifier, while the loops 7 and 8, can be joined to the first six or series, by a dedicated switch on the rear panel of the SmartLab, can be sent through the two the sockets called "Send to" and "To Ret" on the effects loop of your amplifier.
This feature is useful for modulation effects insertion between the pre and the power section of your amplifier.

SmartLab has two instrument inputs.
Through a dedicated switch, input B can be converted to an output to the tuner.
When the tuner function is active, the line of the loop is muted.
Only the function input A/B or A/tuner output is not a storable scene.

Any type of guitar effects and best hand made pedals