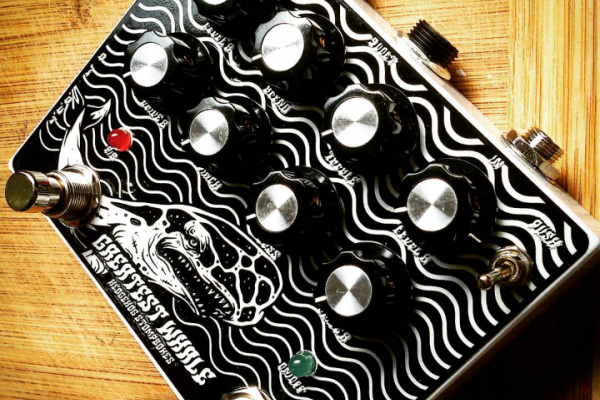 Seller will ship in 40 days

The Greatest Whale is a buffered Preamp, Overdrive, Distortion, Fuzz and D.I. which emulates the bass tube amp saturation.

Level A: as an amp Master Volume, it controls the output Volume when the footswitch is switched to the channel A.

Level B: as an amp Master Volume, it controls the output Volume when the footswitch is switched to the channel B.

Drive A: controls the amount of gain when the footswitch is switched to the channel A, from a pure clean, to a warm overdrive, to a high gain distortion that enhances the natural bass harmonics.

Drive B: controls the amount of gain when the footswitch is switched to the channel B.

Treble: it boosts/cuts the higher frequencies of +/-12dB.

Bass: it boosts/cuts the lower frequencies of +/-12dB.

Pinch: controls the higher harmonics at the input of the saturation circuit.

Fuzz:  more saturation, a fuzz-like distortion with the Drive potentiometer at maximum.

Selettore Texture: to select among three type of saturation.

Sharp: defined and sharpy, with more compression and saturation and less output volume;

Gritty: It is midway between the first two, with good output volume, compression and saturation.

Parallel Out: lets the direct signal that comes from the bass, unbuffered and uneffected, to pass through, to use a second parallel Preamp/Amp.

D.I. Out: it's a low impedance balanced output (XLR) to enter directly into a mixer or a sound card.

Out, Parallel Out e D.I. Out can be used simultaneously to enter in three different devices (mixer, amp, preamp, sound card, etc.).

The Tonebone Hot British is tube distortion at its best! Fashioned from...

The EWS Little Brute Drive is an extremely compact overdrive...