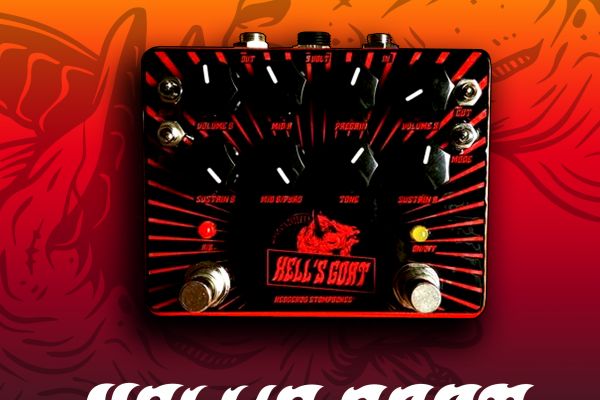 Seller will ship in 40 days

The Hell's Goat is a dual channel guitar and bass distortion/fuzz which emulates the Muff tones, with many features that increase its versatility.

Level A/B: as an amp Master Volume, it controls the output Volume.

Sustain A/B: controls the amount of saturation, from a slight crunch to a high gain distortion full of harmonics but still defined.

Pregain: controls the signal input volume. The circuit can sound like an overdrive at minimum, a standard muff distortion at 12 o'clock, or a super saturated fuzz at maximum.

Mid A: controls the amount of mid frequencies, from the standard mid cut of the Muff at minimum, a mid boost at maximum and almost transparent at 12 o' clock.

Standard: the right balance between high and low frequencies;

Clip 1/2 toggle switch: to select among three type of saturation, for the two saturation stages. The first stage is more subtle, the second stage has more influence on the circuit sound.

Sharp: defined and sharpy, with more compression and saturation and less output volume;

Gritty: It is midway between the first two, with good output volume, compression and saturation.

On/Off switch: switches the Hell's Goat on/off, no matters what channel is selected between A or B.

A/B switch: switches between channel A or B.

Modular 4 loop switcher with Tuner Out, the tip tap solution

Great Dynamics. No feedback at full volume. Clean up with roll-off. Lot's...