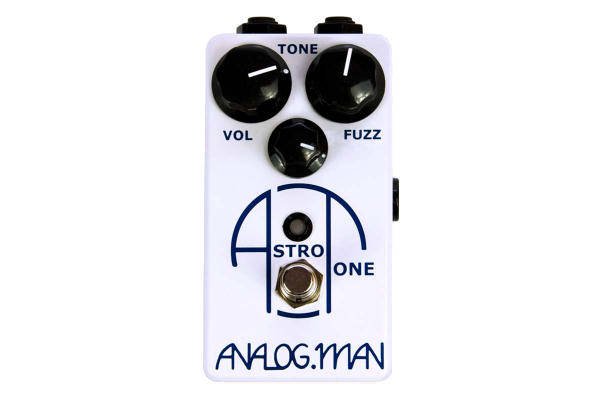 The Analog Man ASTRO TONE fuzz is somewhere between a fuzz and distortion, it acts differently into different amps. But it sounds great into almost anything! I always had trouble using Fuzzfaces live, this one is MUCH easier to use and you can hear it well with a band.

The Analog Man ASTRO TONE is not quite the same as the old pedals. I took our first prototype, made to 100% original specs, to play with my power trio. At the shop we compared it to an original and the sound was exactly the same. But I did not like it, I could not hear it well with the band, it was not thick enough. The problem with the original design was that there was very little low end, the sound was quite thin. You REALLY had to crank up the volume on it to get a good sound. But this would make the ON sound too much louder than the OFF sound for live use. And the tone knob was really limited in the useful range. So we took the circuit and with some modern software analyzed it and found out how we could retain the low end, and make the tone control somewhat more useful. But we made sure that we could still get the EXACT sounds of the original pedal if that was desired. By turning the tone knob up higher, you can still get the original sounds which are good into a large, cranked amp. But we made it so that it now sounds awesome even into a little amp like a Fender Deluxe Reverb, at near unity gain on the pedal. I found several hundred original Astrotone transistors about ten years ago, and have been saving them. Many even have the same 1966 date codes on them as my original pedals! You can see "641" in the picture which means the 41st week of 1966. They are little plastic, flat, pill shaped Fairchild transistors. They have gold plated leads - they were made back in the days when gold was cheap and transistors were expensive! These transistors are pretty consistent, and usually well behaved, but we have do discard some that are too noisy for a fuzz pedal. We should be able to make hundreds of these pedals with these original, excellent transistors. When we run out, we will no longer make a pedal called the ASTRO TONE.   Many people have problems using a Fuzz Face type pedal, like our Sunface, live with a band. I had the same problem which is one reason we are making these pedals, it’s something I need to get the sounds I want. I play Fender amps with a Les Paul, which is not too favorable to fuzz face pedals. But this pedal works great with that setup.

The sound is not as compressed as a Fuzz Face, not SUPER thick and saturated, something between a fuzz and distortion. It’s fuzzier into a smaller amp (Fender Deluxe), and more of a BOOSTER into a large distorted amp (Marshall 1970s Super Lead). It can also be stacked with other pedals, for example running a fuzz face into it can get a sound like Spirit in the Sky, which buzzes and cuts out. Or run the Astro Tone into an OD pedal like a TS808 or KoT to make it fatter.