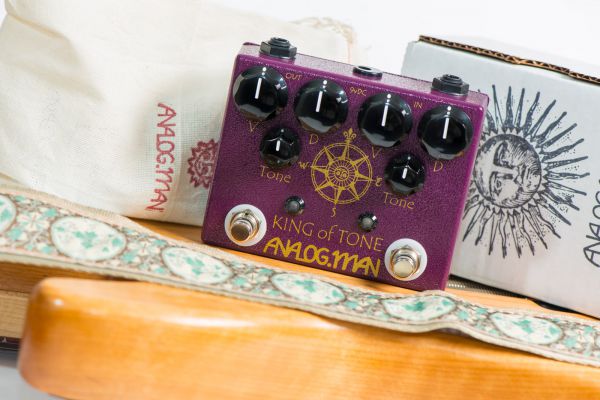 Analog Man, in collaboration with Jim Weider, have come out with the pedal we have been looking for for many years - the King Of Tone (KoT). There are many overdrive pedals on the market, but none of them have been quite right, preserving the tone of the guitar and adding the right amount of overdrive without compromise. There are some good clean boosts available, but they just don't have enough drive to really give your amp the distortion you often want. There are some newer OD pedals that have a great frequency response, but to me they sound too DRY, a bit sterile and cardboardy. There are also some nice sounding pedals available but their sound is too "saturated", losing the touch and feel of your guitar. That is where the King Of Tone pedal comes in - it has enough warm overdrive but still preserves the tones of your quality guitars and amps. If you are looking for a big change in your sound, or a lot of distortion, this is probably not the pedal for you.

Jim had been using an original TS-808 for well over 20 years, it's now housed in a 1980s TS9 case after Rick Danko stepped on it at a concert that THE BAND played. Jim likes the tone of his TS-808, but has always found it loses some low end and is a bit too heavy in the mids. I also love TS808s and have sold thousands of TS9s with our TS808 mods. But sometimes I have wished for a less compressed, more open and natural sound with more of the guitar's actual tone, or as Jim says "you can hear the note better". A Tube Screamer makes it easier to play and sound good due to the compression and vocal midrange boost, but a master player like Jim would often prefer less coloration to allow his techniques and superb tone to get through.

A good friend of ours suggested the old Marshall Blues breaker pedal might work for Jim, so we found one on ebay and I had it sent to Jim who said it was pretty good. So I got another one on ebay and modified it quickly with some improved parts for a baseline test. I brought it up to Woodstock and Jim's sounded better, I was surprised! Then I opened Jim's up and saw that it was already modified heavily!! I thought he was playing a joke on me, but he just laughed, someone sold it on eBay like that. I tried those mods but didn't like them much, so we totally redid the circuit with different diodes, chips, capacitors, treble boost, modes- pretty much everything was changed. And of course the KOT is two pedal circuits in one box. So our KOT pedal is not much like, and does not sound much like a BB pedal anymore. Especially the clean or distortion modes are different, and the higher gain option changes it even more, making it more useful throughout the DRIVE knob range. We used the higher gain KOT circuit as the base for the Prince Of Tone which came out in 2012, and improved the DISTORTION mode also on the POT.

The King Of Tone overdrive was designed to take an amp at reasonable settings, and make it sound like it would sound if it were naturally driven to pure, smooth, tube distortion. It was fine tuned with Jim's 1960s Fender Deluxe Reverb amp to duplicate the sound when his amp is singing, but at lower volume settings - to simulate the natural tube amp distortion of preamp and power tubes. It does the same thing on other amps like Vox, Marshall, etc, making them sing in their own voice. Jim's amp was modified by our good friend the late Cesar Diaz, and is about the best sounding Fender amp I have heard. Later on, I tested the KoT on my own 1966 Deluxe Reverb amp. My amp is stock, and does not sound that great when it's cranked up. It gets loud but not very warm or singing, a little harsh. My amp sounds MUCH better using the KoT for overdrive, then it sounds very close to Jim's amp.

Everyone seems to know what a Tube Screamer sounds like, so we can use them to describe how the KoT sounds. Even our modified Tube Screamers and all the boutique TS clones out there are still basically tube screamers, so this info will still apply.

Once we had a prototype that Jim liked and used on stage several times, I emailed the circuit to my collaborator in Japan, Ohbayashi san, and he tried several ideas I gave him. CAMTAC Ohbayashi san has a suberb ear for details like capacitor and chip selection and came up with some great ideas for the pedal- a chip and diodes that made it sound even better! The special JRC chip he preferred was designed for audio tone controls, and has a warm yet clear sound. The diodes are more open sounding, for a stronger, clearer, less compressed sound and more volume. All the nuances of your playing and each string of the guitar will come through clearly.

The Version 4 King of Tone was developed in late 2005 due to popular demand for separate controls for each channel of the original 4 knob KoT. The original KoT was one overdrive circuit, with 2 channels, having separate volume controls and internal configurations. Almost all "dual overdrive" pedals available are like this. The Ver4 KoT is actually TWO overdrive pedals in one box, one on each side. Each side has an on/off switch, LED, and three independant knobs. Each side also has configuration DIP switches and a TREBLE trim pot on the inside. Having two actual overdrive circuits allows you to use both pedals at once, in series (stacking) for even more possible tones and levels of drive!

Each side has it's own Volume, Drive, and Tone control and LED. We use SUPER BRIGHT Yellow and Red LEDs so you can easily tell which channel is selected. In addition, there is a TREBLE BOOST knob on the inside of the pedal. This is a small knob or trimpot which can be turned by hand or with a pick or small screwdriver. Jim does not need more treble for his Tele, but I found it allowed some superb tones with my '59 reissue Les Paul through my '69 Marshall amp, similar to the sweet yet biting tones of Michael Bloomfield (I believe he used a Fender Twin amp with his famous 1959 sunburst).