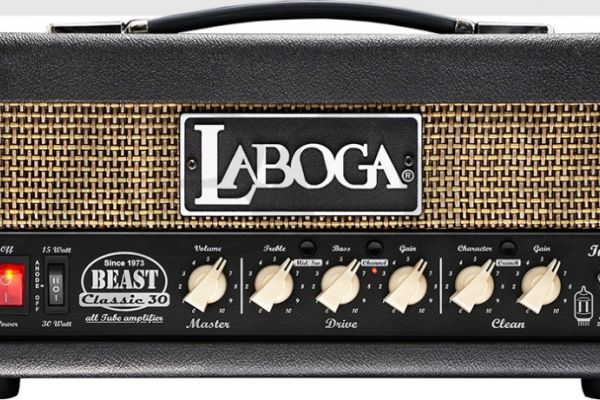 Spedizione gratuita per ordini superiori a € 500.00

The Beast amplifier is an all tube design compressed in a very lightweight and small box. It's designed for people who love pure tube tone and for people who are bored with carrying heavyweight tube "monsters". An experienced musician, as well as a beginner, will definitely appreciate a few unique features, which makes The Beast so much versatile, so it can be used in the studio, on stage and also at home using headphones.

Beast Classic is the third evolution from the Beast series, with the same features and size as The Beast 30+ but with the different tone shape, especially changed to get nice classic vintage sound. It has 30 Watt power capacity, which can be reduced to 15W with front panel switch. It utilizes four EL84 power tubes and the lower output power is achieved by smart reducing voltages instead just disconnecting two of four output tubes. The output transformer is wound in a special vintage unique style, using special core materials. Together with the different preamp arrangement it makes this amp sounding different than the other two models from the series.

The amplifier has three channels: clean, crunch and drive. The clean and crunch share the same knobs (gain and character), but the drive has separate gain knob and two point EQ controller (bass and treble) with “Mid. Switch” onboard. Master section allows volume control.

The clean channel, at the max. setting saturates a bit, but not as much as it does on the crunch channel, which quite reminds an overdriven old vintage amp. Drive channel though, is not a usual modern high gain but more of classic 80’s hard drive. It has less gain then in the previous model The Beast 30+.

Although the Crunch channel is switched from the clean channel, it is not a simple clean boost but actually it is a separate channel inside the Clean Chanel. So it’s using the same knobs, but it’s carefully designed to get good volume and tone balance on both channels, so there’s no need to readjust knobs when switching between clean and crunch. It’s well optimized for various guitar types. The clean channel tone is controlled by only one knob called “Character”. The Character circuit does not just simply cut high frequencies, but it’s a complete 3-point tone stack reduced to a single knob. Therefore, it’s possible to get many various tone types in different setting of the knob. It has also been used in previous “brothers” The Beast and The Beast 30+,buteach one with the different tone shape specially selected with various tests with the guitar.

The drive channel has a standard 2 point EQ: Bass and Treble. Middle knob is not present on the front panel, but the circuit work as it was one with fixed setting. The “Mid. Switch”, solution taken from Mr. Hector amp, has two positions and makes the Drive channel more versatile, because it changes the way EQ works (mostly in mid. frequencies).

The effects loop equipped with level switch allows to use a regular stomp box (-10dB) as well as professional effect modules (+4dB). Additionally, the Return socket can work as a line input.

Headphones output, as well as balanced line output is equipped with the second version of speaker emulation. Both of them are always active independently, so using line out doesn’t affect the headphones. The signal for the emulation is taken directly after the output transformer, so it maintains the unique tone that comes from a tube power amplifier. TheSpeaker switch (on the back panel) allows to disconnect all speaker outputs, automatically applying built-in fake load at the same time. Since the speaker emulation is always active, it’s possible to play at home using just headphones enjoying tube sound (silent play/record). The XLR line output is not only balanced, but fully separated from the internal circuit with additional transformer (Di-Box), which prevents any hum to develop.